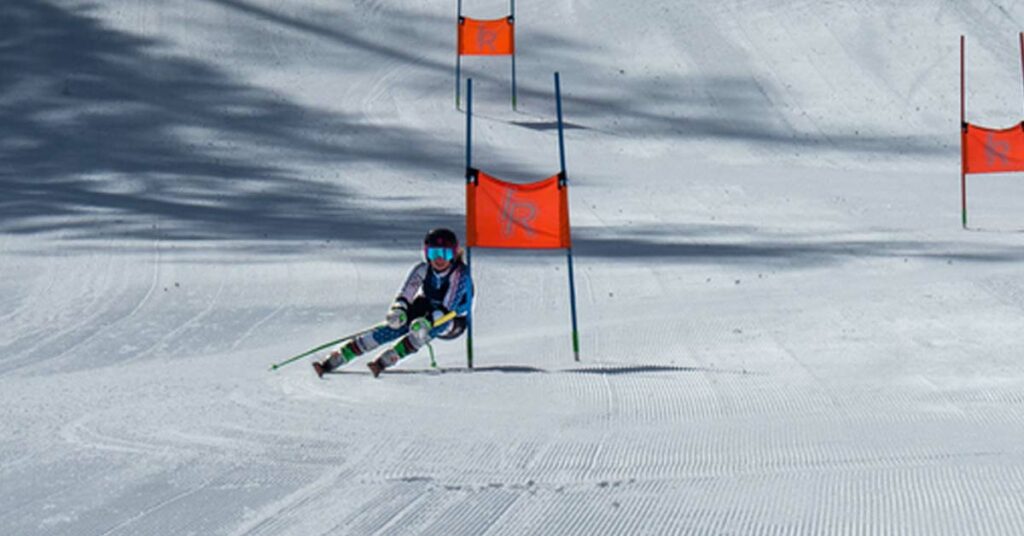 You can’t win a race on the steep, only lose it. Races are won on the flats.

–user BGreen on the SkiTalk forum

There’s a common failure that happens when coaches neglect to focus on measuring splits in alpine skiing.

If you’ve been alpine skiing competitively or coaching talented athletes long enough, you’ve undoubtedly seen it: A spectacularly skilled athlete blazes through steep section after steep section, only to choke on the flats and lose the race.

They fail to realize that it’s their lack of skill on the flats that is losing them precious milliseconds.

But as their coach, how do you convince them to train these skills? How do you train them effectively?

Even Hermann Maier hated training the flats. He preferred Super G to Downhill because of what he called the “boring gliding sections.”

Which is why the first step to training flats is convincing your athletes that they’re not boring at all, but critical to their success.

The truth is, laying it over and bending the skis is an amazing feeling—and it also looks cool. But tucking on the flats looks dorky, especially to a Park or Freeride kid.

Flats are complex, they’re interesting. They present a host of learning and coaching challenges that differ from the steeps:

The good news is that the wearable Protern.io offers solutions to each of these issues.

Train splits on the flats

First and foremost, Protern.io allows you to easily train splits and different approaches to flats.

You can section the splits, marking the beginning and end of each flat section you’re aiming to measure.

Further, you can zero in the average total speed for each section to understand what’s happening.

You can even design a head-to-head battle in which teams of two go down the glide tuck drafting in an around-the-world type exercise. Compare times between teams to get the competition going.

The subtlety of movement required for skiing flats is hard to acquire. There’s just so much less intrinsic feedback, or sensory information, involved in the process.

A coach supplements this with extrinsic feedback, e.g. “When you stretched your arms out, you were more aerodynamic.” But the fact is, the coach can’t actually know this unless they’re conducting some objective timing of those specific moments.

Which is where Protern.io comes in.

Then, you can easily compare each run to see what was working, and what was not.

The same process described above can help you switch up your feedback for different body types.

For example, you might assume an athlete with more mass would go slower on the flats, but this is not always the case.

A bigger athlete has more surface to push against the wind, and produces more pressure on the snow.

But they can beat a lighter, more naturally aerodynamic athlete who is using poor tuck position, and vice versa.

It is always difficult to compare different equipment setups in a meaningful way.

Sure, a given setup might be faster overall, but why? If you’re not measuring the steeps against the flats when measuring splits in alpine skiing you can easily miss opportunities to optimize the gear for a given course.

Flats aren’t every athlete’s favourite, but by offering immediate, crystal-clear feedback, you can make a world of difference in their approach.

After all, you can only optimize what you can measure. Protern.io is absolutely the best tool to pinpoint and train the particularities of every ski run, whether that’s flats, steeps, or anything else.

Visit our website to learn how Protern.io can help you and your team to shave precious seconds off your runs today!